No compromise, silent and efficient 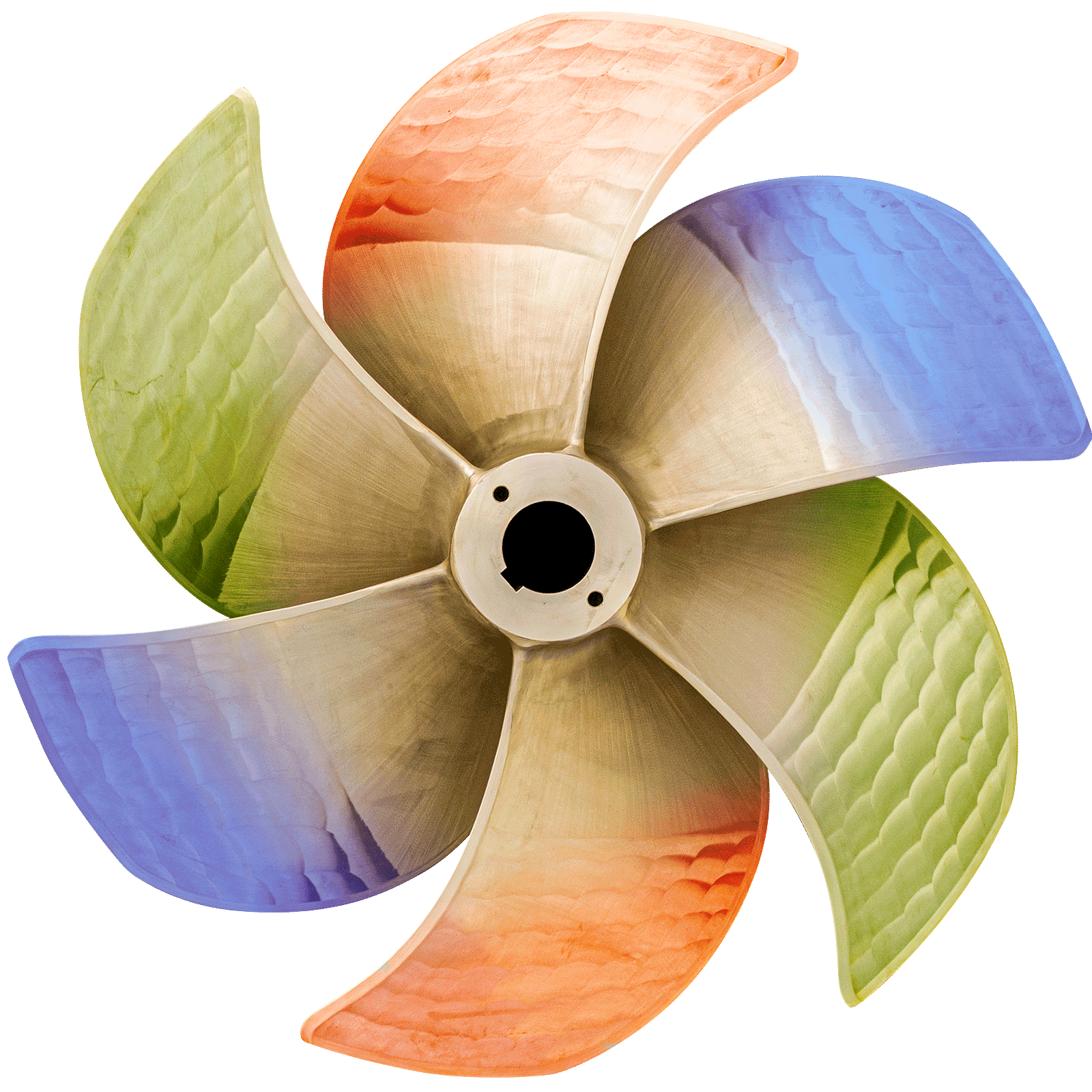 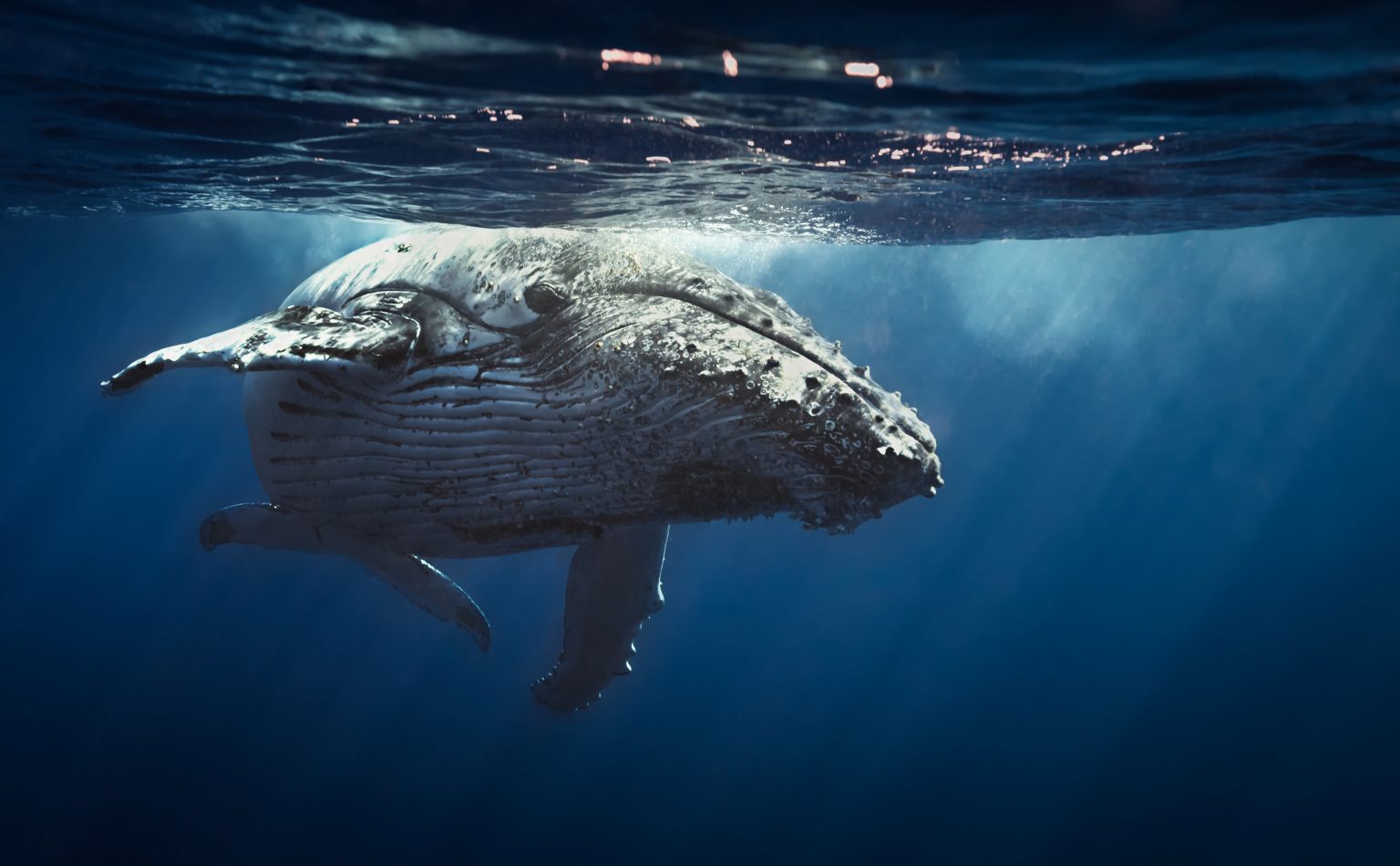 Our Footprint in the Maritime Ecosystem

Everybody knows, from personal experience, that humans make noise – particularly when they use machines. Machines such as ships. On a ship noise acts in two directions: on the one hand, pressure waves in water travel over large distances and threaten lifeforms that have lived here undisturbed since prehistoric times. On the other hand, noise and vibration place considerable stress not only on the crew (and passengers), but also on the ships structure. Besides the engines, the propeller is next biggest source of vibrational noise. It imparts shock waves directly on the surrounding water and these, upon collision with the hull; transfer the shock to the ship.

The Evolution of the High-Tech Propeller

When developing propellers it is important to protect both the marine environment and the people aboard the vessel from excessive levels of noise. During its decades-long history, the ship propeller improved significantly through accumulating experience and the use of advanced computational methods. One cornerstone of this development was the individualisation of propeller designs. Every propeller’s blade- and profile geometries were designed to fit its operating conditions. This process managed to somewhat improve both the efficiency and noise behaviour of a propeller despite the fact that these two objectives are so often opposed. 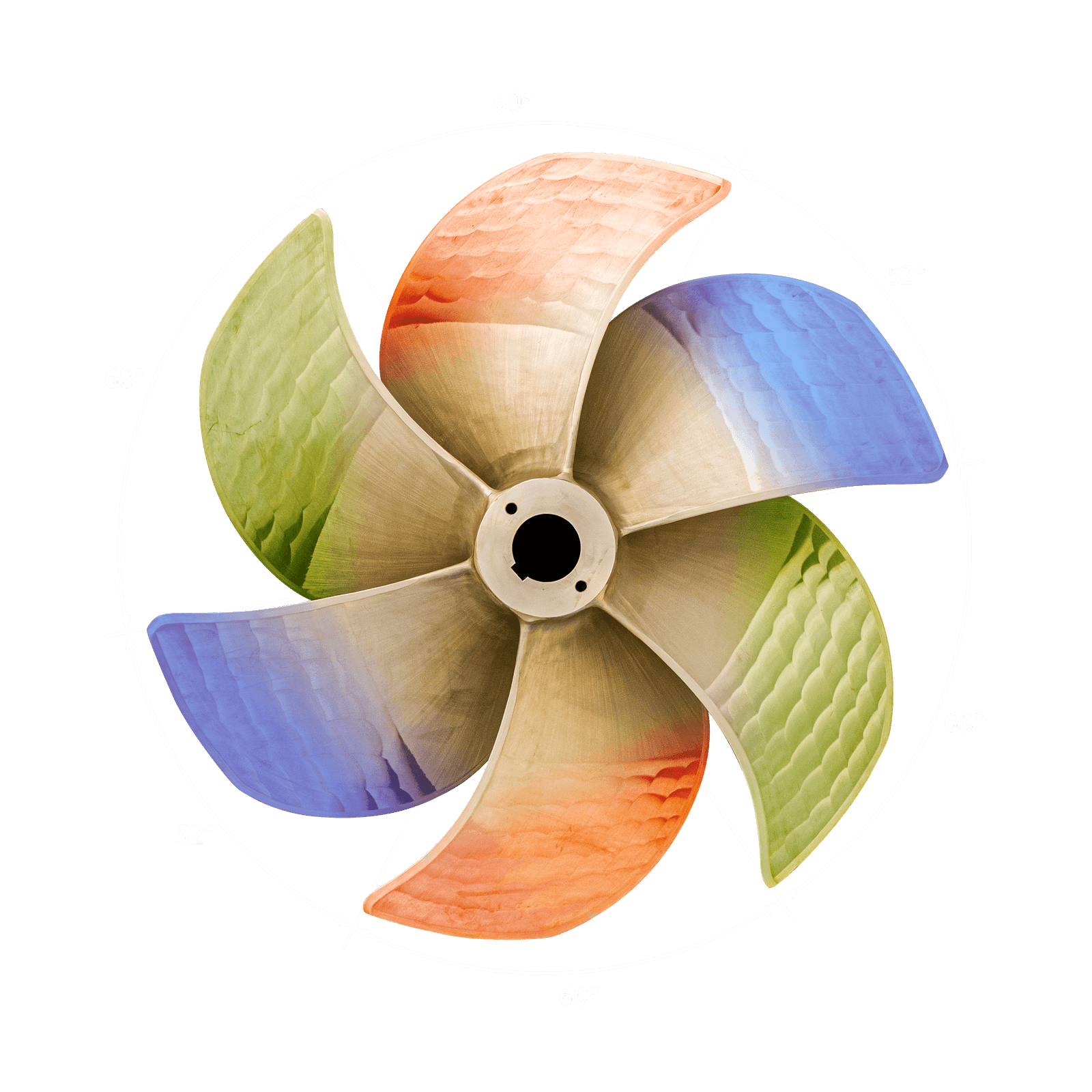 Despite all the energy poured into the development of low-noise, high-efficiency propellers no one had yet succeeded in preventing the unfavourable, uniform impulses caused by the propeller blades. It is known since antiquity that when marching across a bridge, it is best to break step or else risk causing resonant vibrations that can destroy even the strongest structure. But how would one strip a propeller of this uniformity without causing imbalances?

efficiency*Compared to an conventional propeller

After years of development, we managed exactly that: with our patented Multipulsion® principle, we created a balanced, non-uniform propeller. By combining different approaches for the variation of the blade geometry with methods of compensating for the imbalances thus caused, Promarin designed a completely new propeller. Its behaviour was extensively simulated using our most modern processor cluster. The simulations exceeded expectations and showed that the Multipulsion® successfully combines multiple effects to reduce noise. Not only does the Multipulsion® eliminate harmful harmonics, it also smears the vortices that normal propellers develop at their blades tips, which can cause destructive cavitation and extreme noise. These improvements do not come at the cost of a higher fuel consumption because the Multipulsion® is still a propeller in the classical sense – just more intelligently made. 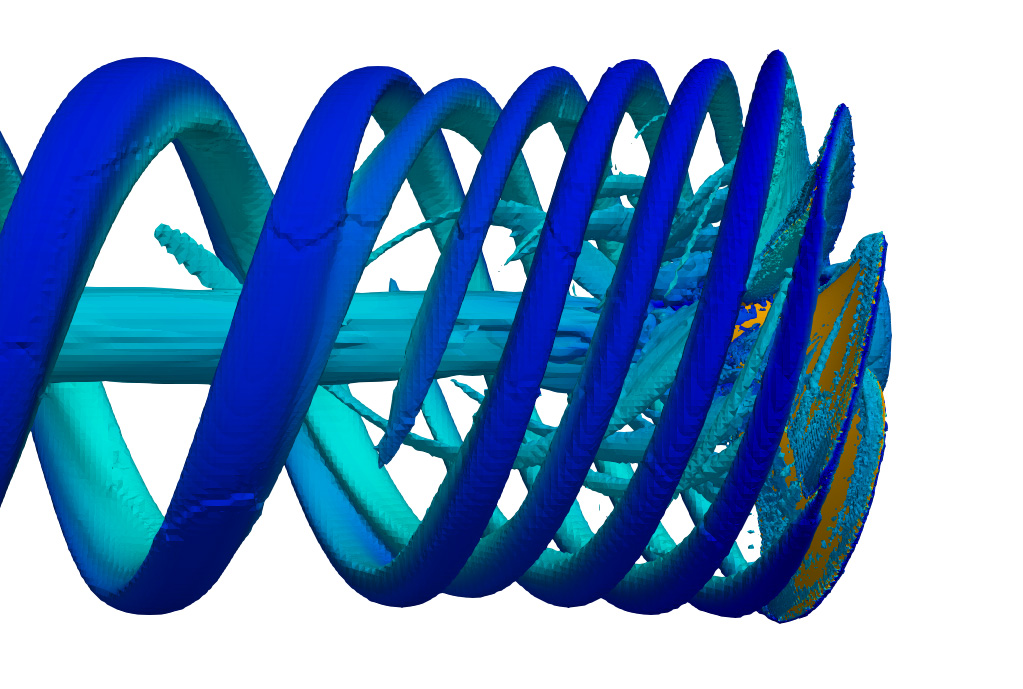 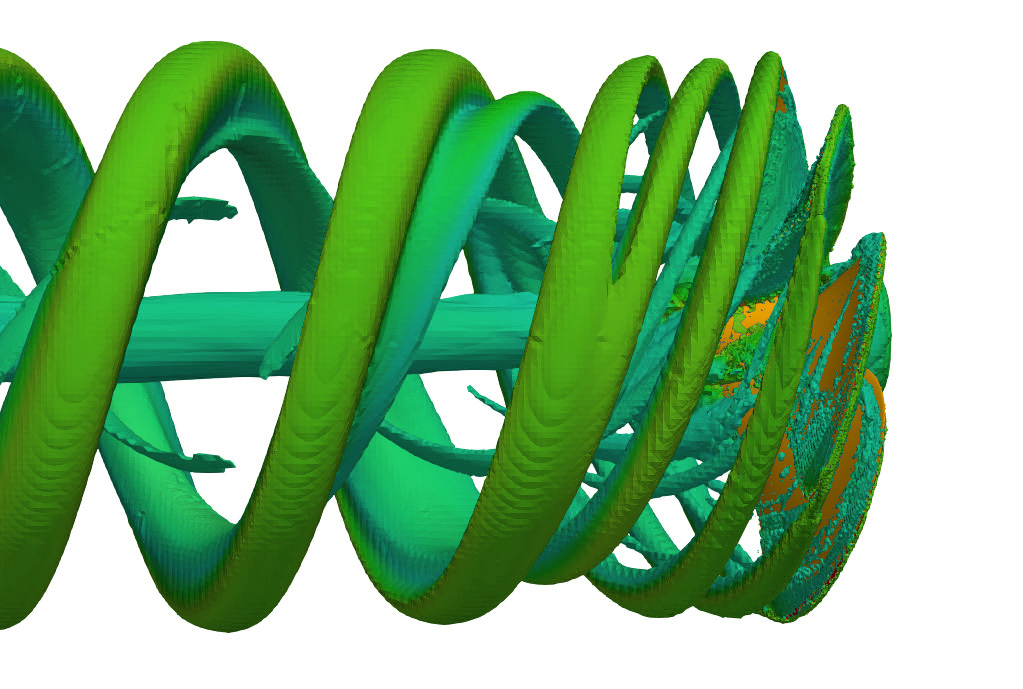 To ensure that the principles of the Multipulsion® can be applied to any vessel type, we developed a modern design strategy. We programmed a purpose-built python library called pyromarin, which consists, at its core, of multiple modules for geometry creation, simulation management, analysis and optimization. The construction of a Multipulsion® begins with a conventional propeller geometry. This is then virtually installed in the ship and its behaviour is simulated. For this purpose Promarin has 12 servers with a total of 832 cores available in house. Through a 200Gb/s network the cores are connected into a supercomputer. After the initial simulation, forces, pressure fluctuations and other parameters are analysed and the propeller frequencies are automatically modified under consideration of balance and efficiency. That is how classical propulsion turns into Multipulsion®.

Since its conception, extensive practical experience with the Multipulsion® has been gathered. After laboratory tests in Berlin, the first full-sized propellers were taken into service. We can now proudly report that the Multipulsion® is an incredible success on every vessel on which it is used. Look at some of the results:

This push boat works on the Rhine as a barge tug and support vessel. In comparison to its propeller, the vessel has a large engine (940kW @ 1600rpm) with caused strong vibrations at its primary operating speed of 1400rpm. The vibrations were so extreme that they destroyed some of the vessels electronic equipment. The strongest vibrations were, however, measured in the wheelhouse where they reached a magnitude of up to 6mm/s rms. All harmful vibrations could be eliminated by installing a new, patented Multipulsion® propeller. 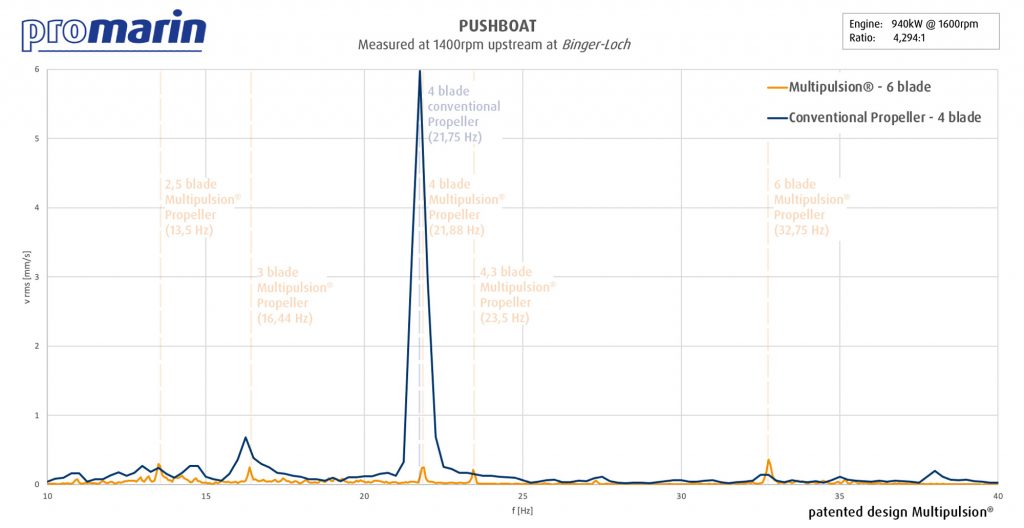 The noise level on a motor tanker was so high that the crew could not sleep. Measurements showed a particular emphasize of blade frequencies. We suspected that resonant interactions between the propeller and the hull were to blame. Through the installation of a Multipulsion® the vibrations were significantly reduced and the crew could finally get some rest. 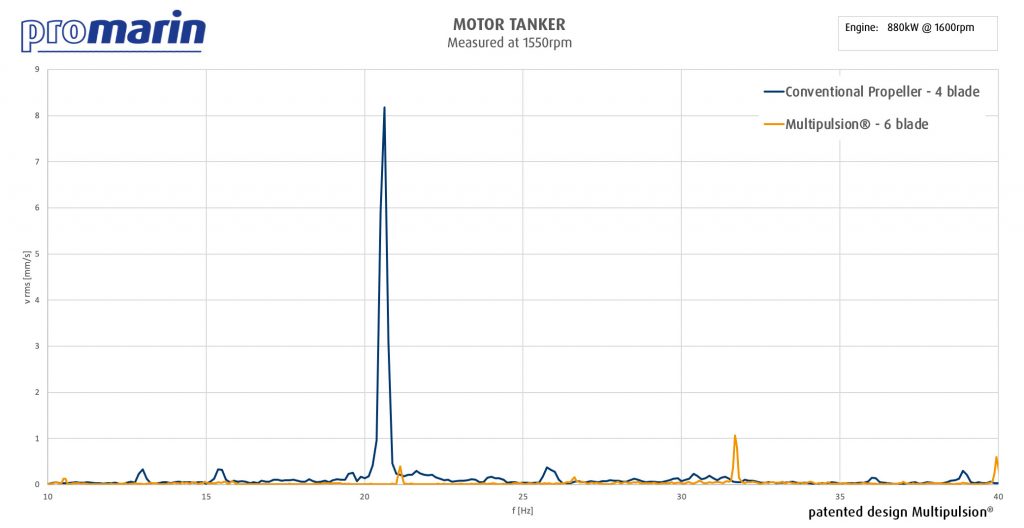 Numerous measures have already been taken to make the ship quieter. Components such as the engine, nozzle and propeller have been replaced. Among other things, a High-Skew 5-Blade Propeller from Promarin was installed. This helped, but some attached equipment continued to vibrate very strongly. After installing the Multipulsion®, the vibrations and the noise level have decreased significantly. The noise level in the wheelhouse has been reduced by 6dB (A). In the bedroom, only 52dB (A) were measured under full load. 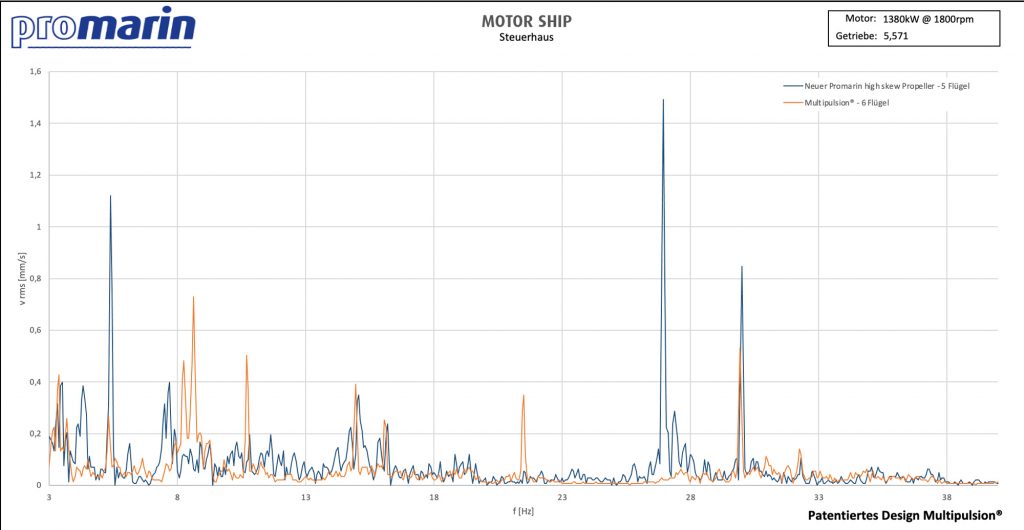 Could you profit from our new Multipulsion® technology?
Don't hesitate to contact us by phone or mail.

Promarin – Specialist for Propeller and Marine Technology since 1992

Shipowners, shipyards and captains have been placing their trust in us for decades. Apart from propellers, we offer complete propulsion systems and comprehensive service whilst continuously placing our focus on the best performance, reliability and eco-friendliness. Promarin GmbH has built more than 10,000 propellers since its establishment. 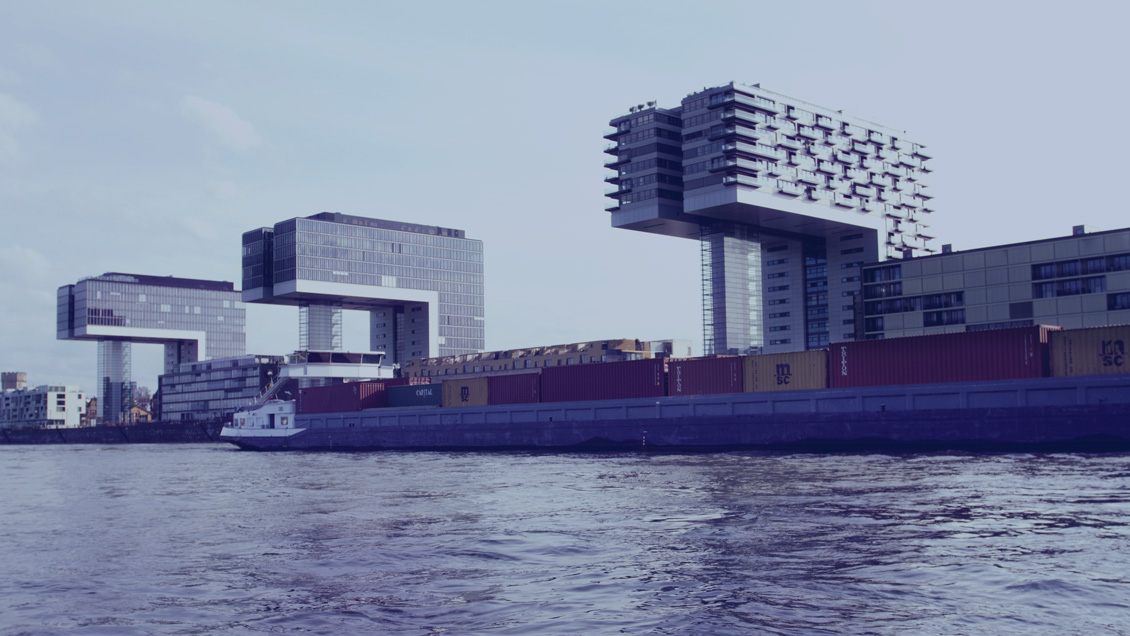